It’s always a good day when I get to crack open a cold beer and hang out with an old friend and solid drummer. Chuck Keeping, the drummer for Big Wreck, was recently over at the simpledrummer studio. We played some drums, fired up the BBQ and had great conversation about his life and drumming influences. Playing with Big Wreck has been Chuck’s primary focus, although there is much more to his musicianship and career. Aside from everything that comes along with being Big Wreck’s drummer, we spoke about fatherhood (both of us being new dads), musical heroes, memorable life experiences and more. Watch the full interview below.

In the next video Chuck and I play a game called “Who’s That Drummer?” I play eight 30 second clips of isolated drum tracks. These drums-only tracks are from hit songs by many legendary bands and artists. You would be amazed how recognizable they are. Chuck will have 30 seconds for each clip, to guess the song, the artist and who the drummer is. See if you can guess the answers before Chuck can.

Aside from his work in the band Big Wreck, Chuck is also known for playing with artists like Suzie Mcneil, Fathead, Anjulie, Marshall Dane, Lee Oskar, Johnny Reid and Jeff Healey. He is also well known for his work as a session drummer for major labels such as Sony & BMG. Chuck endorses Sonor drums, Zildjian cymbals, Vic Firth drumsticks and Remo drumheads.

Song Of The Week 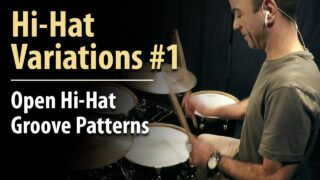 Simpledrummer® is a website dedicated to providing quality drumming education for drummers of all skill levels. Our goal is to help drummers from all over the world to learn how to play the drums and achieve their drumming goals. We offer multiple products and services including live 1-on-1 lessons over video conferencing, pre-recorded interactive lesson videos, textbooks and digital downloads. Some of these services are available to the public and others are only available through a monthly membership.